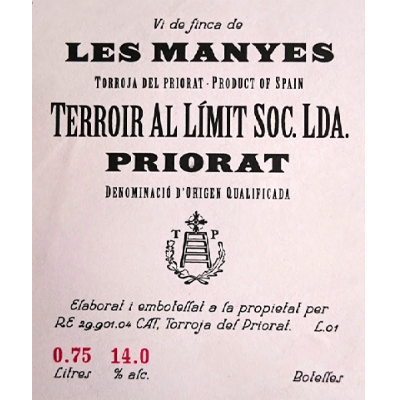 The 2014 Les Manyes was bottled a little earlier, in June 2016. In many wineries in Priorat, 2013 is clearly better than 2014, but it's not that clear in the case here, and you have to take it wine by wine. In the case of this Les Manyes, I think 2014 was the big surprise, with a combination of depth, perfume, subtleness and power difficult to achieve. The clay and chalky soils provide for an extraordinary texture of tannins, a lot less coarse than those from slate soils. It distills all the Mediterranean herbs and flowers, the essence of ripe red cherries and wild strawberries with some chalky minerality in a nose and palate that is close to perfection. This is a tour de force Garnacha from... chalky soils in Priorat! There are 1,008 bottles produced. Robert Parker. The Wine Advocate. 98/100.