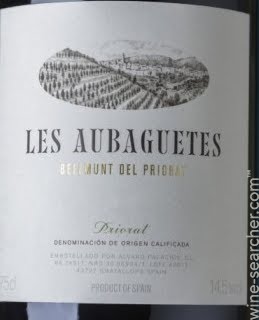 There is a new wine in Palacios's portfolio, and no, it's not a white. It's another red and, in the hierarchy, is more expensive than Finca Dofí but cheaper than L'Ermita. The first vintage is the 2015 Les Aubaguetes, a single ancient vineyard in the village of Bellmunt that used to contribute to the blend of Les Terrasses. It's a blend of 80% Garnacha, 19% Cariñena and 1% white grapes—Garnacha Blanca and Macabeo—fermented with natural yeasts in foudre, where the wine also aged for 14 months. It has the inner power of the old vines and the struggle of the Priorat conditions, while the higher-yielding vintage seems to have provided drinkability and very pure flavors. There is a touch of rusticity here, not as much as in Les Terrasses but more than in L'Ermita. The palate is textured and soft, subtly mineral with a very long, almost salty aftertaste. Beautiful. A great debut. Only 1,780 bottles were filled in March 2017.