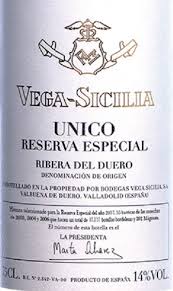 2006: I tasted the 2006 Único again, and it's clearly the best Único produced in the last few years, to which I don't find much logic, as on paper 2004 and 2005 were better years in Ribera del Duero. However it is, the 2006 is a fantastic modern Vega Sicilia in the making, powerful and clean, still very young and marked by the élevage with a whiff of American oak and a creamy texture in the palate. It should age very well for a very long time. I'd wait to pull the cork, even if it's drinkable and quite showy already. This is the current vintage in 2018, even if the 2007 and 2008 were released before it and even before the 2005. In 2019 they will release the 2009. 93,993 bottles, 2,552 magnums, 165 double magnums and six imperials were produced.. 98/100. ROBERT PARKER.

2007: They have kept 2005 and 2006 for now, and they are releasing the 2007 Único from a lighter vintage that is accessible already; they will even sell 2008 before 2005 and 2006. 2007 was a cold vintage in Ribera and it produced lighter, fresher wines (perhaps not as problematic as 2008, but there was also frost in 2007). The wine might be a tad lighter than other vintages, but it's more structured than 2008; it combines elegance and power, is nicely balanced and should be able to develop in bottle for many years, although the quick evolution of the bottle once opened made me hesitate about its drinking window. Let's hope I'm wrong. 80,000 bottles produced. 95/100. ROBERT PARKER.

2009: I tasted a bottle of the 2009 Único blind and was taken by the freshness, the red fruit notes and the Burgundian-like characteristics of this vintage, which on paper was quite warm and dry. I also tasted the 2009 Valbuena, which is always more approachable, and was blown away by its aromatics. With time in the glass the Único opened up and got closer to the character of Valbuena but with more depth and clout, while showing extremely elegant. I tasted it again in the context of all the wines from the group, and it delivered all that I saw when I tasted it blind. It takes some time to unfurl its aromatic palette, and it feels young and somewhat undeveloped, younger than it is. It has a touch that made me think of the old vintages of Único on the nose but with very polished tannins and a soft mouthfeel that provides elegance. This is a wine that ages for no less than ten years before it's released. 2009 seems like a great vintage for Vega Sicilia, much better than what I anticipated. It should develop nicely in bottle. 74,274 bottles, 3,390 magnums, 209 double magnums and 22 imperials were produced. It has been in bottle since June 2015. 98/100. ROBERT PARKER.