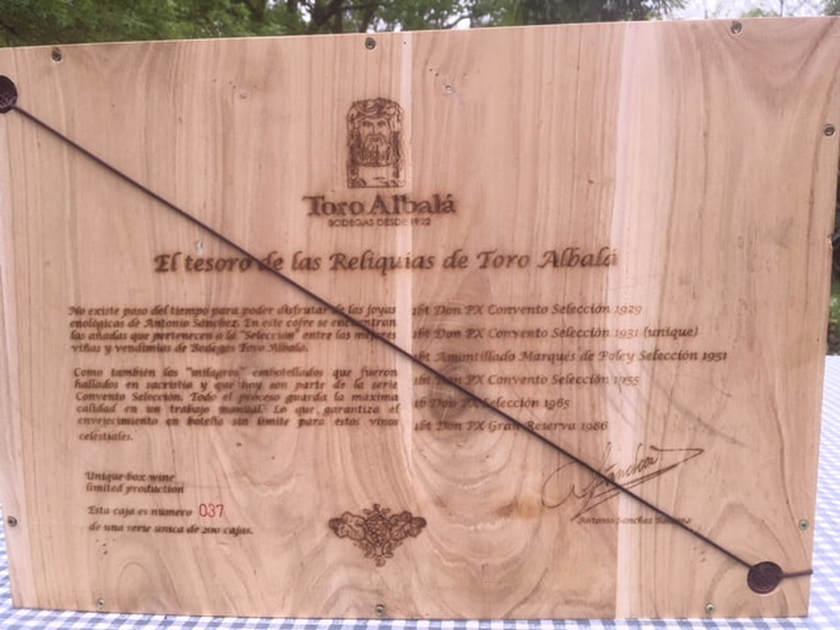 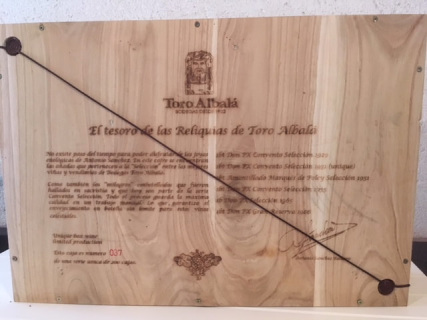 FOR THIS PRODUCT CHOOSE THE TRANSPORT BY WEIGHT WHEN CHECKING OUT

Older is not necessarily better. The extreme 1929 Don PX Convento Selección is a thick, dense and unusual, rare sweet beast. It is very dark with a green border, dense, oily and serious full-bodied palate with the profile of a PX from Jerez. With 500 grams of residual sugar per liter, it is a little monolithic, a little heavy and not so easy to drink. Still it is an impressive, very sweet wine that is really unique. 6,200 bottles were filled in September 2014.

If someone told you they kept a wine for 84 years in barrel before bottling, you'd think they are nuts, right? Well, that's what the folks at Toro Albalá in Aguilar de la Frontera - in the province of Cordoba, part of the Montilla Moriles appellation - did with their 1931 Don PX Convento Selección. This is part of what they call 'vinos olvidados,' which means 'forgotten wines.' The border is amber, with green tints that denote very old age. Such old age provides an array of unusual aromas and flavors, including iodine and salt that compensate the sweetness (403 grams) and even the alcohol (18%). It's terribly balsamic, with notes of dry herbs and spices, cigar ash, carob beans (algarrobas), incense and noble woods. The palate is very, very sweet and concentrated, unctuous, dense, with a chewy texture. This goes beyond a glass of wine, a drop of it is like having a piece of cake. I don't think this reaches the complexity and depth of the 1946, which remains the benchmark for these old sweet PX, but it's truly terrific! 9,650 bottles were filled in June 2015.

My favorite of the two Amontillados is the 1951 Amontillado Selección a rare, single-vintage Amontillado produced with Pedro Ximénez grapes as is the norm in Montilla-Moriles. It's a bright mahogany color with an amber-green tint that reveals pharmaceutical notes and balsamic, with roasted, charred aromas and a sweetish palate that retains the sharpness expected in this kind of wine. It is lacking a bit in the mid-palate before ending with a slightly bitter, tarry finish. This is completely different to an Amontillado from Jerez. It was bottled in March 2011 into 4,650 bottles. It is unusual and is perhaps not for all palates.

One more single-harvest, old sweet wine, the 1955 Don PX Convento Selección was bottled in September 2014 and it had been aged slowly in very old American oak barrels and getting thick and concentrated through evaporation. It's 320 grams of sugar are (partially) compensated by 6.5 grams of acidity. It has a nose and palate of chocolate-covered candied orange, spices, molasses. I'd say the dominant aromas in the nose are dark chocolate. It's very dense, developing notes of very concentrated licorice and balsamic, mint, camphor and evolving notes of petrol with time. Complex, rare and unique. 8,400 bottles.

Small lots of old vintages are released following no apparent logic, like this 1965 Don PX Selección, which is produced with white Pedro Ximénez grapes but it's black rather than white, bottled in June 2014 with 290 grams of residual sugar. It has a nose of pure curry, aromas of an Indian restaurant, very balanced, not as sweet as others, in fact it's more bittersweet than sweet, combining the spices with bitter chocolate and with very good acidity that makes it relatively easy to drink. 9,600 bottles were filled.

Toro Albalá has been releasing vintage-dated, sweet wines in chronological order for a while (I have great memories of the 1972) and the 'current' release is the 1986 Don PX Gran Reserva, which is a dark, sweet and concentrated dessert wine aged in American oak casks until bottling in June 2014. It has 350 grams of residual sugar. It's extremely dark, motor oil-dense, sweet wine with notes of raisins, hints of flowers, minty with aromas of candied orange peel and herbs, really aromatic and showy. The palate is dense, with the sweetness balanced by good acidity plus spicy and chocolate flavors. 40,000 bottles and 25,000 half bottles produced. The price shown is for a full bottle. 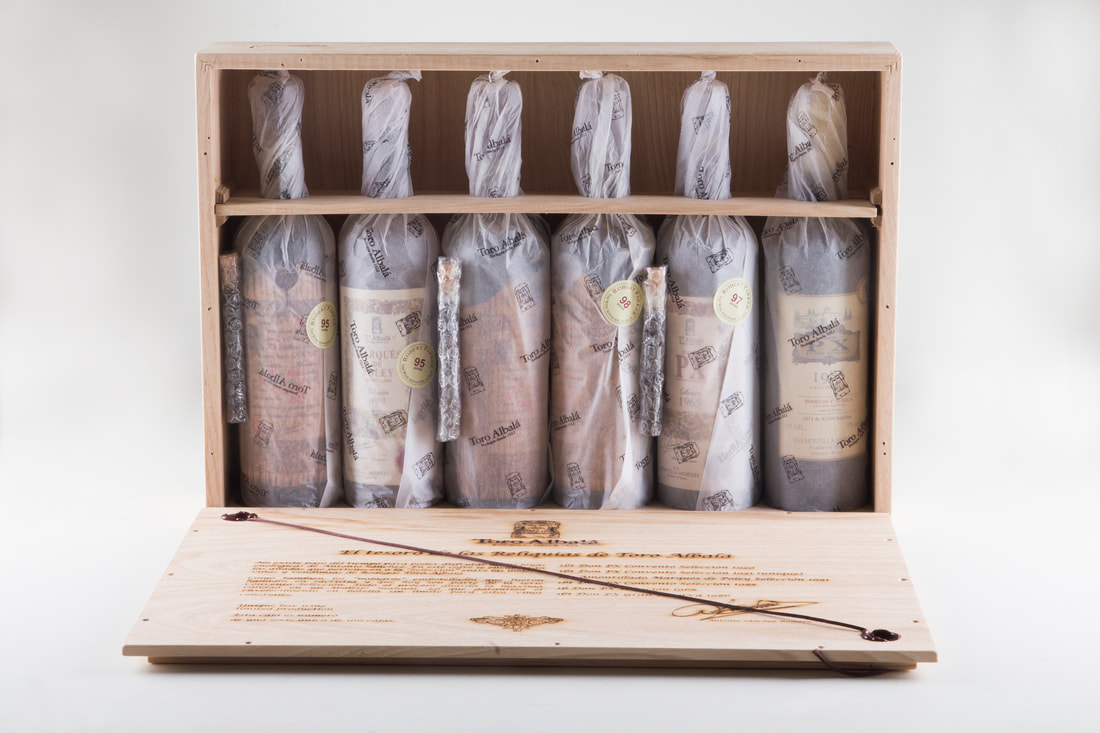 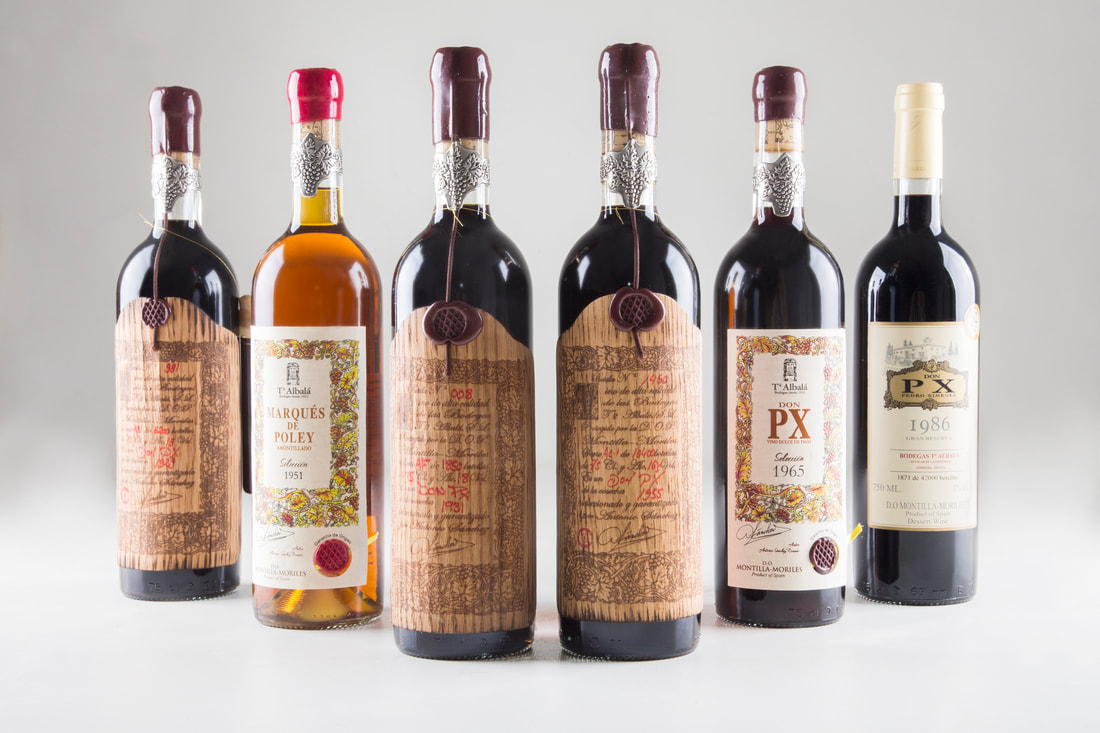